“He spent countless sums on his belly.”
~ Apicius described by Athenaeus of Naucratis in his Deipnosophistae (The Philosopher’s Dinner), 3rd century CE

This imaginary portrait of MGA comes from the Pantropheon (1853), a history of food by 19th century French chef Alexis Soyer.

Roman men were known by a personal name, a hereditary clan name and a nickname. Gaius Julius Caesar would have been understood as “Gaius of the Julia clan, called the Caesar.” Children could inherit their father’s identifying nickname or cognomen, and like our family names, they were often passed down for so long that people forgot their origin; Caesar was variously parsed as “Hairy”, “Blue-Eyed”, “Cut”, or having something to do with killing an elephant. But cognomina were originally intended to reflect the most noteworthy thing about an individual. If an individual accomplished something remarkable, they might gain a new cognomen, as when Publius Cornelius Scipio became Scipio Africanus after his military victories in Africa. This was also the case with Marcus of the Gavia clan, called the Apicius, who got his cognomen by loving food more than anyone else in Rome.

Marcus Gavius Apicius (henceforth referred to as MGA) was a wealthy Roman gourmand who lived in the early part of the first century, during the reign of the Emperor Tiberius (14 – 37 CE). His cognomen of Apicius derives from an earlier Apicius of the first century BCE. This man was not his ancestor; rather, the first Apicius was so much of a foodie that his name became synonymous with the love of fine dining, so that anyone with a similar interest would receive it as a nickname. There was even one more famous food-lover called Apicius in the second century, a hundred years after MGA. We know this because anecdotes about “Apicius the food-lover” are dated to the reigns of various Emperors, too far apart to be the same person.

MGA is by far the best-documented of the three Apicii, and many Roman historians at least mention him in passing (a contemporary biography called On the Luxury of Apicius has sadly been lost). He was famous for his grand dinner parties, where he served costly delicacies like cockscombs and flamingo tongues, fish drowned in fish sauce and the livers of fattened pigs. He kept a villa at Minturnae, a seaside town about a hundred miles southeast of Rome, known for its fine shrimp. On hearing that the shrimp of North Africa were even better, Apicius once took a special trip there just to try them. But when locals brought the catch of the day to his ship, he found it underwhelming and had his captain turn around, returning to Minturnae without ever having made landfall.

Unfortunately, like all the best stories from Roman histories, the shrimp story is nigh-impossible to verify. But it does at least paint a picture of how Apicius was perceived. Roman historians depict him as a member of the Emperor’s inner circle, on casual terms with powerful people and not afraid to splash his money around to impress them. Seneca writes that while walking through the fish-market, Apicius engaged in a playful bidding war over a huge red mullet with the Emperor and another friend. Pliny tells us that Drusus, the Emperor’s son and heir, stopped eating cabbage sprouts after Apicius told him they were commoners’ food. 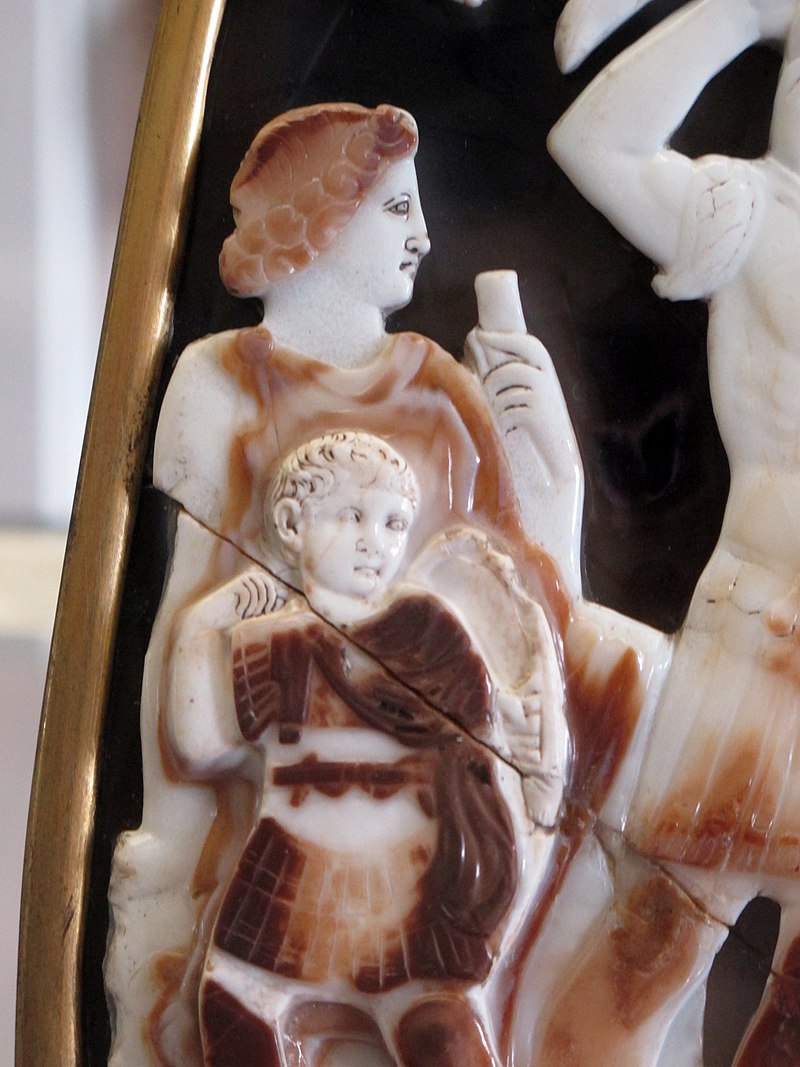 A contemporary portrait of Claudia Livia Julia, or Livilla. Amongst family, Roman women were often known by an informal pet-name (in this case, Livilla, “Little Livia”) because they rarely had personal names. Sisters often had the same name and were distinguished with Major and Minor (Elder and Younger) or Prima, Secunda and Tertia (First, Second and Third). Photo by saiko (2012).

An especial friend of Apicius was the ambitious social climber Lucius Aelius Sejanus, whose first wife Apicata was likely Apicius’s daughter. Tacitus makes an offhand remark that Sejanus “sold his body to Apicius” as a young man. Accusing public figures of sexual misconduct was as Roman as the Coliseum, so this story may be only hearsay meant to mock the closeness between the two men. Whatever the nature of his relationship with his father-in-law, Sejanus would divorce Apicata to marry his lover Livilla, the Emperor’s niece. This was after Sejanus had helped Livilla end her own marriage, through poison rather than divorce. Livilla’s ill-fated first husband was her cousin Drusus, the same guy who took Apicius’s dietary advice. While Livilla and Sejanus plotted to extend their power, Apicata discovered their crime in the year 31 and sent a letter to Tiberius revealing the true killers of his son. The Emperor’s revenge was swift and terrible. Sejanus was executed along with his three children by Apicata, so that he would have no heirs. Livilla was executed too, and popular legend asserts that her punishment was carried out by her own mother, who locked her in a room without food. Disgraced by the scandal and grieving for her children, Apicata committed suicide by poison, a common last resort for Romans facing extreme public humiliation.

Apicius, we are told, also chose to die by poison. While his death may well have been related to the tragedy that befell his family, Roman sources connect it back to food, like every other detail of his life. Seneca describes the death of MGA thus:

“Having spent a fortune of 100 million sestertii on his kitchen, spent all the gifts he had received from the Imperial court, and thus swallowed up his income in lavish hospitality, Apicius found that he had only 10 million sestertii left. Afraid of dying in relative poverty, he poisoned himself.”

The Imperial court of Tiberius was fraught with danger, a place where life was cheap and one’s social position might change at any moment. If Apicius really did poison himself, who knows how freely he made that choice?

Apicius is the common name of De re coquinaria (On the Subject of Cooking), the best-known and most-complete surviving Roman cookbook. You can’t go far into the subject of Roman cooking without mentioning the ten books of Apicius; it’s the ultimate sourcebook on Roman cuisine, with recipes for everything from asparagus to braised flamingo, and nifty kitchen hacks like how to fix bad-tasting broth and how to make cheap olive oil taste expensive. But Apicius wasn’t solely written by MGA, nor was it written by the Apicius before him or after him, though they may have all been contributors. The name seems to have become attached to the cookbook because of its long association with culinary matters. It’s likely that Apicius the book was compiled over a long period of time by multiple authors, including enslaved and formerly-enslaved career chefs working in the kitchens of the wealthy. The text is telling; different recipes use the Latin of different time periods, and the majority is written in the vernacular of daily life (“Vulgar Latin”), not the literary Classical Latin of the highly-educated.

Seven recipes found in Apicius the book are attributed to Apicius the man, and MGA may be the one that is meant. “Apicius” was also the name of a type of cake and a method of cooking cabbage greens with a pinch of mineral soda to maintain their color (though we can assume that MGA, who turned up his nose at cabbage, was not responsible for that last one). When MGA appears in later Roman literature, it is sometimes as the quintessential extravagant glutton, and sometimes as an ingenious expert who “proclaimed the science of the cookshop.”

Though his family fell victim to cruel dynastic politics, history remembers MGA best as a culinary experimenter and seeker of pleasure. Hearing some of the stories about him, I can’t help but think he would have fit right in with today’s food world. I can picture him feverishly typing out Yelp reviews, or standing in line for hours to taste the latest trendy hybrid delicacy, only to get bored after a couple of bites. He lived up to his cognomen, creating a legacy that would outshine his personal tragedies.

2 thoughts on “Ancient Eaters: Marcus Gavius Apicius, the Other Other One (Roman, 1st century CE)”