Well, it finally happened. Episode 1 of From Eggs to Apples, my long-in-the-making food history video series, has been released! Co-hosted by Fiorella Di Carlo of Fiorella Eats, and featuring original music by Ismail Butera, as well as help from a whole bunch of different people who I met through all kinds of different means over the years.

In our first episode, we start with the Yale Babylonian Tablets, the first-ever written recipes, produced around 1600 BCE in ancient Mesopotamia. In this video, we’ll make two versions of a beef stew from the tablets: one from Mesopotamia’s north (Assyria) and one from the south (Babylonia).

Babylonian-Style Beef Stew:
½ lb beef (bottom round or chuck), cut into small cubes, 1 large turnip, peeled and cut into small cubes, 3 cloves garlic, minced, 1 tablespoon animal fat (pork or beef tallow) for pan, 1 ½ cups water, Salt
Boil water in a large pot and blanch the meat for a few minutes. Skim foam off the top, remove meat from the water, and discard water. Heat animal fat in a deep pan. Add garlic and sautee for a few minutes. Add turnip and beef and allow it to slightly brown while stirring. Add water, cover and let simmer for about 20 minutes on low heat. Add salt as desired. Serve with flatbread.

Assyrian-Style Beef Stew:
½ lb beef (bottom round or chuck), cut into small cubes, ½ lb small intestine (beef or pig), washed, drained and sliced into small rounds, 3 cloves garlic, minced, plus 1-2 more for serving, sliced thin, 1 tablespoon animal fat (pork or beef tallow) for pan, ½ cup lily bulbs, washed and separated (available at Asian markets), 1 ½ cups water 1 ½ cups animal blood (cow or pig, available at some Asian markets and butcher shops), 1 leek or green onion, sliced thin, salt
Boil water in a large pot and blanch the meat and intestine for a few minutes. Skim foam off the top, remove meat and intestine from the water, and discard water. Heat animal fat in a deep pan. Add garlic and saute for a few minutes. Add intestine and meat and allow it to slightly brown while stirring. Add lily bulbs and stir for a minute more. Add water, cover and let simmer for about 15 minutes on low heat. Add blood, stirring continually to prevent coagulation. Simmer for another 10 minutes, until the stew has thickened and the color is dark and chocolatey. Add salt as desired and top with finely sliced raw leek and garlic. Serve with flatbread. 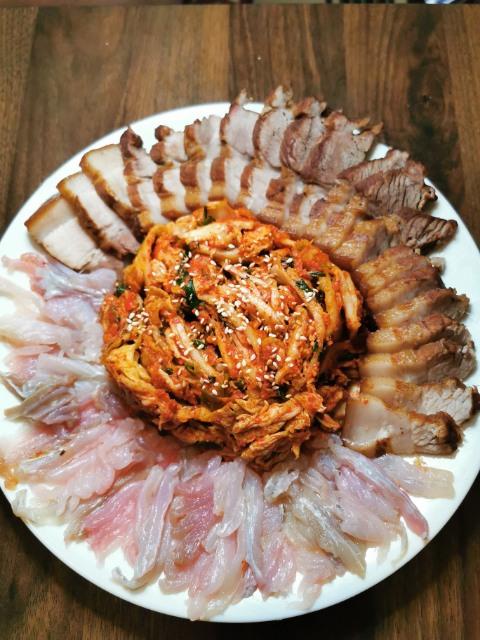 The cartilaginous fish (sharks and rays), whose skeletons are made of rubbery cartilage, are a far more ancient lineage than the bony fishes, whose skeletons are made of, uh…..bone. Thus, biologically speaking, these ancient critters tend to be a bit weird. For instance, instead of having a urinary tract, some cartilaginous fish expel uric acid like sweat, directly through their skin. When fermented, the uric acid in their flesh breaks down into ammonia, which has powerful preservative properties; extremely valuable for ancient peoples living in the cold maritime environments where these fish are found. The only downside is the distinctive smell of all that ammonia, which is kind of like, uh….piss.

One of these stinky, urea-excreting cartilaginous fish is the Greenland shark (which in Inuit mythology was said to live in the sea goddess’s chamberpot*). Another is the flat, stingray-like spotted skate. In different parts of the world, both animals are similarly fermented into a strongly-flavored delicacy.** Icelanders ferment Greenland shark into hákarl, while Koreans ferment skate into hongeo.

Hongeo has been produced in Korea since the 14th century, when the skate’s unusual preservative properties were first noted, making it the only fish that could be transported long distances without salt.

I didn’t make this hongeo myself, but it’s uncommon enough outside of Korea that I knew I had to buy it as soon as I saw it in a Korean grocery store. Technically a type of hoe (Korean sliced raw fish, pronounced hway), it’s traditionally eaten raw in thin slices. It is often served alongside makgeolli (Korean rice liquor, which I’ve made and written about on this blog before), and with kimchi and braised pork (bossam) in a platter called samhap, “three flavors.” I had freshly-made kimchi in my fridge, so all I had to do was make the pork and a sweet/sour cabbage pickle to make wraps of the three (using Maangchi recipes).

Turns out the smell of hongeo is ASTOUNDING. Pure ammonia. It was also unexpectedly hard to remove from the cartilage, requiring a very sharp knife (what term does a chef use in this situation? Decartilage?) I was skeptical at first, but the taste is not too overwhelming and reminds me of a blue cheese (although the ammonia sure does clear your sinuses), with the chew of raw fish, since that’s exactly what it is. And along with the other ingredients it was a really delicious combination. 3/3 points for the 3 flavors. 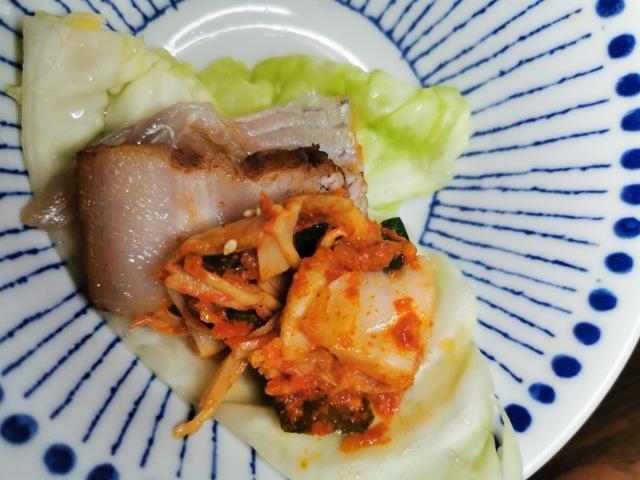 I also made a sweet/sour cabbage quick pickle to make wraps of the three flavors.

* Sedna, the Inuit sea goddess, is one of my favorite mythological figures ever. Her story is a tale of survival and triumph in the face of adversity, in which an unassuming girl gets screwed over and even physically harmed by men (including her own father), only to end up becoming the ruler of the entire ocean. She is also the only non-Greco-Roman deity with a planet in our solar system named after her.

** In Greenland, a species of small seabird called the little auk is also fermented whole into a similar delicacy called kiviaq. I am not sure if these birds have a high uric acid content in their flesh like the shark and ray discussed here, but the kiviaq recipe apparently only works with little auks, and attempts to make kiviaq with other bird species can attract dangerous botulinum bacteria.