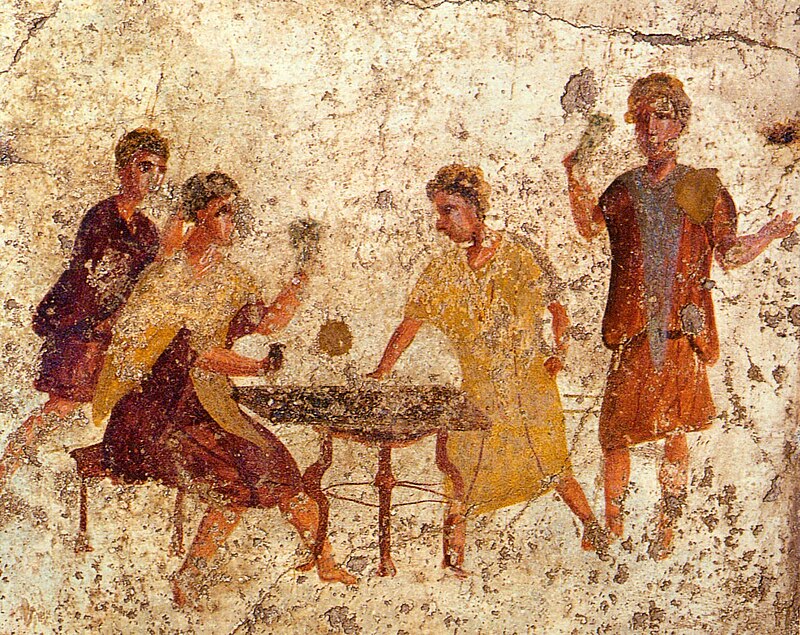 “Therefore death to us is nothing, nor concerns us in the least, since nature of mind is mortal evermore.” ~ Lucretius, De rerum natura (On the Nature of Things), Book III

Last week, I went back to my college (Bard) to help out with an Ancient Roman dinner party being hosted by the Classics Department. I jumped at the chance when one of my former professors invited me, not least because he told me that the student hosts of the party were planning to spit-roast a whole lamb. You just don’t get too many opportunities to do that when you live in Brooklyn.

The party was held at a large house off-campus, and my hosts were already well-prepared for their guests by the time I arrived. I was impressed and delighted to find a whole assortment of Roman delicacies: spiced wine, crepes with honey and sesame seeds, a nut omelette, asparagus patina (based on the same recipe I recently posted my own version of), and more. I brought a few ingredients and supplies they requested, such as the piney resin mastic, which went into the spiced wine. I also contributed three Roman dishes: posca or vinegar-water, savory biscuits called mustacei, and a bean mash flavored with honey, ginger and leeks. But the main event was out in the backyard, where a huge black rotisserie grill awaited: not to mention our 32-pound friend Lucretius the lamb, already skinned and cleaned.

Mustacei, from Cato the Elder’s De agri cultura (On Farming), is one of the oldest known Roman recipes, dating to about 160 BCE. In addition to the grape juice (mustum) that gives them their name, they also contain spices and sheep cheese.

The hosts and I started on the lamb right away, which was definitely a 2-3 person job. We pressed cloves of garlic into the flesh and rubbed the lamb all over with lemon juice, oil, and the Roman spice long pepper, which I’ve been saving for just such an occasion. Eyes stinging from the increasingly smoky coals in the bottom of the grill, we stretched Lucretius out and secured his feet and head with twine. Handfuls of lemon rinds, garlic, herbs and bread went into the lamb’s body cavity before we sewed it shut, closed the lid of the grill and plugged it in.

While Lucretius turned over the flames, we went back to preparing the rest of the party. It wasn’t long before crowds of Bard students and faculty swooped in to taste the Roman table-spread laid out on the back porch. The excitement in the air was palpable; everyone knew what we were really there for. At last, after two or three hours, the outside of the lamb was crispy and black and the meat looked cooked through. With much assistance and not quite enough heat-proof gloves to go around, we managed to carefully lift our prize out of the grill and maneuver it to a nearby folding table.

From there, my hosts handed me a large knife and put me to work carving Lucretius, a task which naturally attracted a crowd of onlookers. One girl murmured “I can’t watch this” after a minute or two and walked away. On the other hand, one of my former professors jumped right in with a smaller knife and started cutting a portion for herself off the neck.

One of the hosts readies Lucretius for the fire.

The end result was delicious! I even got to try an assortment of organs, which we cooked separately (eyeball, kidney, liver, heart, lungs, brain, in order from worst to best). The outside of the meat had that charred, smoky taste that you can only get from cooking over an open flame. So much food in the ancient world had that flavor, and as attached as I am to my bottle of liquid smoke, there’s just no substitute. For me, the taste of woodsmoke was the most authentically Roman detail of the whole party.

Now that I know what to expect from a full lamb, it makes me want to try boodog (the ancient Mongolian roasting method: cook the animal inside its own skin with scalding-hot rocks). Maybe next time I have a yard to work in….