In our third episode, we investigate the cuisine of Ancient Greece, including a dish alluded to in the work of the first food critic, Archestratus (who I have written about on this blog before). One of the two recipes in this episode, for the roasted barley flour dough called maza, I have also written on this blog before; the other is something I’ve wanted to try for a long time: mackerel baked with grated cheese on top.

Heat a skillet or pan over medium-high heat and add barley flour. Stir continually with a wooden spoon until it gives off a toasted aroma and turns brown. Remove from heat and add water, oil and salt. Continue stirring or mix with your hands until you have a thick dough. Let stand for a few minutes to cool. When the dough has cooled, squeeze small amounts in the palm of your hand to shape them, or form into balls or discs. Serve with fish, or balanced with another flavorful dish.

Preheat oven to 350 degrees F. Grease a pan or baking sheet with olive oil. Remove the spine of the fish and lay them out flat in the pan, with the skin side down. Drizzle olive oil over the fish and sprinkle with salt and asafetida. Grate cheese over the fish (enough to cover), leaving head exposed. Bake for 20-25 minutes, until cheese is golden-brown. Add vinegar and fresh herbs as desired. Serve with maza or bread.

“My maza comes to me from my spear, from my spear comes my Ismarian wine, and I drink while leaning on my spear.” ~ the Greek warrior-poet Archilochus explains how he earns his keep 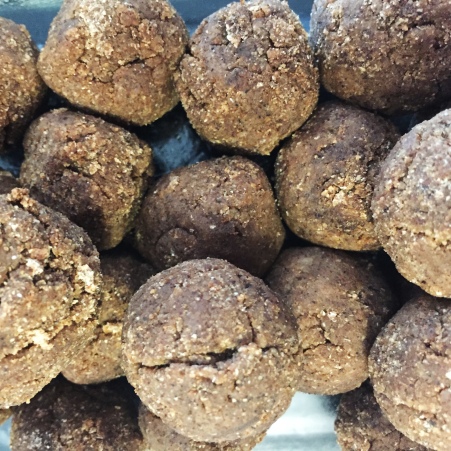 Barley is one of the most ancient crops known to humanity. It was the staple crop of Egypt and Mesopotamia as well as Greece, where it is referenced in some of the earliest written inscriptions. An example of the centrality of barley to the Greek diet can be found in the name of the Greek goddess of the harvest: Demeter, from dēa métēr, “Barley Mother”.

While various ancient cultures venerated barley, they differed in how they made use of it. Porridge is perhaps the simplest preparation, since it requires nothing more than whole grains, water and fire. There are numerous accounts of porridge throughout the ancient world, made from barley as well as other grains, and it likely dates back to humanity’s earliest farming days. Bread and beer are comparatively more complicated to produce and are therefore more recent innovations. While barley beer was cherished in Egypt and Mesopotamia, barley bread often had a lesser reputation. Barley is harder to refine into flour than other grains such as wheat, and barley bread (especially with the pre-Industrial technology of ancient times) arguably inferior to wheat bread, being more dense and less chewy. In Egypt and Mesopotamia alike, everyone drank barley beer and those who could afford it enjoyed wheat bread, while barley bread and porridge were staples of the lower classes.

The Greeks disdained beer as a drink for barbarians. They did make porridge and bread, and agreed with other ancient peoples that barley bread wasn’t really worth the trouble. But their preference was to serve barley in a unique form somewhere between porridge and bread; an intermediate recipe called maza (μᾶζα in Greek letters, and originally pronounced like “mahsdah”).

Maza begins as álphita: barley flour that has been toasted over a fire, giving it a dark brown color and a nutty aroma and flavor. This rich flour is mixed into a dough with hot water and a little bit of oil (and perhaps salt). No baking is required, as the flour has already been cooked. The maza is then shaped into balls or pancakes. Sometimes small maza dumplings were added to broth to create an ancient matzoh ball soup.

Maza is believed to date back to well before the emergence of a recognizable Greek civilization, and is referenced by very early Greek authors such as Archilochus above, who lived in the 600s BCE. Maza requires very little effort or technology to produce and is both nourishing and versatile. It should come as no surprise, then, that of the many ancient cultures who made use of barley, the Greeks were not the only ones who came up with this particular recipe. In Tibet, a very similar dish is called tsampa, and is such an important part of local culture even today that Tibetans sometimes refer to themselves as “tsampa-eaters”.

Your barley flour should look something like this when it’s ready to be mixed with water, salt and oil. Make sure you stir thoroughly to distribute the heat.

The Ancient Greeks prided themselves on a simple, hearty diet, believing it the source of their strength and, to some degree, their superiority. The varied cuisines of other peoples like the Persians were looked down upon as decadent, diet seen as evidence of moral character (“you are what you eat”). Maza has few ingredients, does not require much preparation, and is quite filling: thus, it checks off all the criteria of an ideal Greek staple.

In Greek dining, food was divided into two broad categories. Sitos was the grain–the bread, porridge or maza that formed the basis of the meal. In hard times sitos could be a meal on its own; in the play Eirēnē (“Peace”), Aristophanes describes a prisoner as “eating nothing but barley”, a Greek equivalent of our phrase “bread and water.” But most of the time, you would want your sitos with something tastier to go on top of it. This is where the other broad food category, opson, comes in. Opson was formerly translated into English as “relish“, but it covers a broad range of dishes, from vegetables and cheese to fish and meat. Containing ingredients that were more costly and less common overall, opson dishes were cherished and celebrated. The balance between richly flavored opson and bland sitos in the Ancient Greek meal calls to mind a similar concept in Japanese and Korean cuisines, where a varied assortment of dishes (called okazu and banchan, respectively) is served in small portions with rice.

First, make your álphita. Pour 1 and 1/4 cups of barley flour into a skillet over medium-high heat.  Stir it thoroughly with a wooden spoon until it gives off a toasted aroma and turns a rich brown color. Then, remove from the heat and add 1/2 a cup of water, 2 tablespoons of olive oil and a pinch of salt. Continue stirring until you have an even, thick dough.

You might need to add a little more water. Once your dough has cooled, you can shape it as desired. Note that it is not flexible enough to knead like bread dough.

Your maza is now ready to serve: make sure you have some opson ready!

Maza has a pleasant, nutty flavor, and I’ve especially enjoyed it with a simple spread of mashed olives, garlic, olive oil and minced herbs. I’m sure it would also be great with cheese or anything with a sauce that you might dip bread into. Just don’t overindulge in the delights of opson, lest you be branded a gluttonous opsophagos, literally “opson-eater.” Barley, the ancient mother that sustained the Greeks, is still pretty good on its own. VIII out of X.

*adapted from Cooking in Ancient Civilizations by Cathy Kaufman (2006)