“[Barley] groats belong to the wheat family. They have juice that is quite nourishing and tenacious.”
~ Aelius Galenus (Galen), De alimentorum facultatibus (On the Properties of Foodstuffs), early 2nd century CE

Even after wheat bread became the favorite of the Mediterranean world, barley retained special significance as the first grain eaten by mankind, the primordial source of sustenance. The Greeks ingested their precious barley in many forms: as bread, as roasted flour or maza (a recipe I reconstructed here), and in beverages like kykeon and ptisane (πτισάνη, ptee-sah-nay).

While the peoples of the Ancient Near East made barley into beer, Greek kykeon and ptisane were not fermented, although both could be mixed with wine. The two are often confused with one another, equated as the same in a grammar lexicon of the fourth century. And both seem to have blurred the lines between our modern categories of food versus drink. In Homer’s Iliad, goat cheese is grated over a kykeon before serving, and later writers like the 12th-century Eustathius describe it as a thick barley soup. Hippocrates in the 5th century BCE mentions ptisane variations containing whole barley grains and warns that these must be cooked to their maximum softness, lest they expand in the stomach and cause indigestion (this perfectly reasonable warning is repeated centuries later by the physician Galen, quoted above).

So what was the difference between kykeon and ptisane? One clue can be found in the etymology of their names. Kykeon literally means “mixture”; ptisane comes from the verb ptíssein, to peel or crush. The main ingredient in kykeon is alphita, ground barley meal or flour, while the word ptisane can refer to hulled (peeled) barley grains as well as the drink made from them. In surviving literature, ptisane exists in strained and unstrained forms; kykeon does not. So while kykeon resembled modern grits or polenta, ptisane consisted of whole grains cooked in water, or, if strained, barley water. 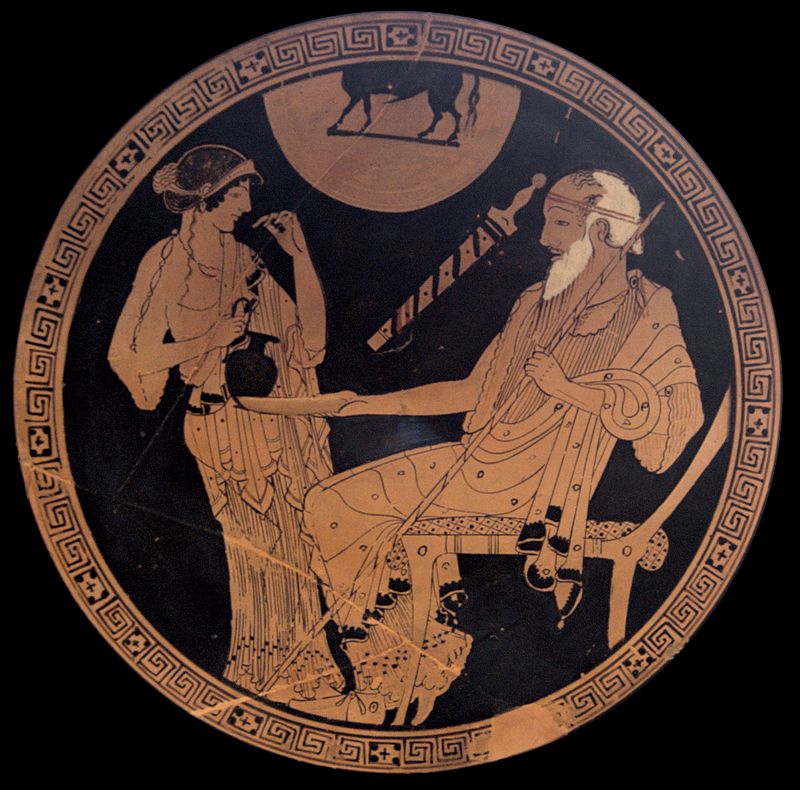 This red-figure vase from around 490 BCE, by an artist named Brygos, is believed by some to depict the kykeon scene in the Iliad, when an enslaved woman named Hecamede prepares a wine and cheese kykeon for the elderly King Nestor. Others identify these figures as the old warrior Phoenix with the enslaved Briseis (there are a lot of enslaved women in the Iliad…)

Aside from being nutritious and plentiful, water leftover from cooking grain would have been safer to drink than fresh water in ancient times, having been boiled. Even today, barley water is enjoyed wherever barley is grown, from sweet jau ka sattu in Pakistan and roasted barley tea in East Asia to the Robinson brand lemon barley water traditionally served to players at Wimbledon. Through Latin tisana, Greek ptisane gives rise to the archaic French and English word tisane (tee-zahn), which can refer to barley water or any type of herbal tea.

Hippocrates and Galen both write at length about the properties and variations of ptisane, though they are more concerned with its medicinal than its culinary value. Hippocrates recommended ptisane for the healthy and the sick alike; indeed, barley is rich in fiber, niacin, thiamine, and other valuable nutrients. Galen rightfully considers unstrained ptisane more nutritious than strained, but he acknowledges the popularity of strained barley water when he uses it as a generic example of a liquid people consume, along with soups (rofēma) and milk, in his treatise on the human digestive system.

Galen mentions many possibilities for flavoring barley water–olive oil, salt, cumin, honeyed wine, vinegar–but he himself recommends dill and leeks. My recipe includes honey and two of the most popular herbs in Ancient Greek cuisine: mint and oregano. As both kykeon and ptisane were general terms referring to a preparation technique, we can assume they varied based on personal taste, what else the chef had on hand, and whether the liquid food was meant to fortify or refresh.

Bring the water to a boil over medium-low heat. Add the barley, cover and simmer for 20-25 minutes until the barley is cooked.

Remove from the heat and strain out the barley, reserving the water in a bowl. Save the cooked barley for another recipe (unless you wish to incur the wrath of Demeter, Greek goddess of grain).

While the water is still hot, add the honey and herbs. Remove the herbs after 20 minutes and stir thoroughly to ensure the honey dissolves.

Like other forms of tea, ptisane can be enjoyed hot or cold.

The delicate, milky flavor of barley water takes on a light sweetness from the honey and a slight spiciness from the the oregano and mint. I find it really refreshing when served ice cold, although that’s not particularly Ancient Greek.

In my classes on Ancient Greek cuisine and the Eleusinian Mysteries (secret religious rites in which kykeon was ritually consumed) I’ve served this recipe in place of kykeon. My first attempts at recreating kykeon didn’t go over so well with a modern audience, but I’m determined to figure out an appetizing version of Homer’s cheesy grits with wine. Stay tuned for further barley experiments!