“Your love has penetrated all within me
Like honey plunged into water,
Like an odor which penetrates spices.”

Fruits and vegetables indigenous to Africa played an important role in the Ancient Egyptian diet.  Some of these, like okra and watermelon, have since become popular throughout the world. Others, like molokhia and moringa, remain less widely-known outside their original place of origin. In this latter category is the versatile and nutritious tiger nut, which is not actually a nut but a small, hard tuber that grows underground.

Tiger nuts appear to have been originally farmed in Egypt, many thousands of years ago. Although some modern farmers consider them a weed, they are rich in nutrients like fiber, potassium and magnesium. The tiny tubers are joining amaranth and other foods of the ancient world that are currently being rediscovered by modern food trends. Google “tiger nuts” and you’ll turn up countless articles referring to them as a Paleo superfood.

Like real nuts, tiger nuts have many different uses. They can be eaten raw or roasted, with a texture and lightly sweet flavor much like a macadamia or Brazil nut (or a raw Asian sweet potato, as I noted when I was in Maangchi’s Korean grocery store video). They can be ground into tiger nut flour, which has seen some popularity for gluten-free baking. I’ve also ground the nuts, mixed them with water and strained to make tiger nut milk. While it was delicious, it went bad after an alarmingly short amount of time (48 hours), even though I stored it in the fridge. It must have been a special treat indeed for ancient peoples living in hot climates without refrigeration. When the North African Moors conquered Spain, they brought the custom of drinking tiger nut milk with them. Mixed with cinnamon, cloves, and honey or raw sugar, it became the original form of the creamy beverage horchata. The Spanish word for tiger nut is chufa, and horchata de chufa is still popularly consumed in Spain today. North Americans are more familiar with rice milk horchata, which was developed in colonial Mexico by Spanish colonists who missed the chufas back home.

The Egyptians, for all their other cultural achievements, left no known cookbooks behind. This recipe is as close as we can come to following an Egyptian’s written instructions. It was reconstructed based on steps depicted in a tomb painting, part of a comic-strip like longer scene depicting servants preparing many different foodstuffs for a feast. Rekhmire, the owner of the tomb, was a government official during the early New Kingdom period (1400s BCE), a bright and prosperous spot in Egypt’s long history.

The key ingredient in Rekhmire’s tiger nut cakes is tiger nut flour, which you can purchase online or in stores that carry health foods. Tiger nut flour is more gritty than grain-based flours, but some brands are ground finer than others. If you’re buying a different brand than the one I linked to, check brand reviews first. 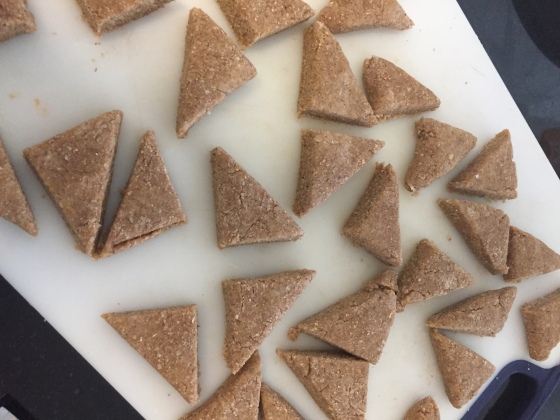 Combine ingredients, knead into a dough and set aside for 30 min.

On a lightly floured surface, roll or press the dough out to a rectangle about 1/2 an inch thick. Cut into quadrants, then cut the quadrants diagonally both ways to create small triangles.

Melt about 2 tablespoons of butter in a frying pan over medium heat. Place as many triangles of dough as you can fit into the pan, and let them fry on one side for 2-3 minutes. Then flip them, drizzle some of the honey into the pan, and fry on the other side 2-3 minutes more. Add more butter and honey as needed to fry the rest of the cakes, and serve warm.

The cakes have a very dense, heavy texture and are not as flexible or light as many modern baked goods. However, they are also fried in butter and drenched in honey, which hide a multitude of shortcomings. IX out of X. 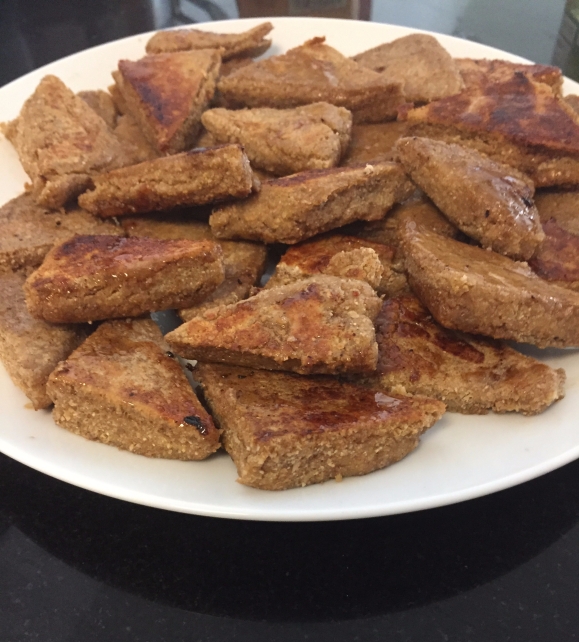 * Adapted from Cooking in Ancient Civilizations by Cathy Kaufman (2006).