These are the gourds I purchased in Queens which I will be profiling over the next couple of posts. Ten cultivars, nine species (can you guess which two belong to the same species? Bonus question: which two radically-different species are members of the same genus?)

On a recent trip to the New York City neighborhood of Woodside, Queens, home to large communities of South and Southeast Asian immigrants, I was captivated by the wide variety of gourds sold in the grocery stores; many of which I had never heard of, much less tasted. Stricken by a case of gourd fever, I returned to the area on a gourd-hunting expedition with my friend Dressler, whose blog, Bitter Butter, is focused on the history of desserts and pastries. While Dressler explores the baking possibilities of our gourd haul, I’ll be cooking each one and profiling them in a series of posts.

Welcome to The Gourd Files.

GOURDS, GOURDS, ALL TYPE OF GOURDS

What do pumpkin, cantaloupe, cucumber and zucchini have in common? If you said “they’re all fruits, even though we call some of them vegetables,” you’re right! But they’re also all members of the same family: the gourds.

You might know the sweeter gourds as melons, others as squash, marrows or courgettes, and still others (like cucumber) by a unique species name, but in many languages no such distinctions are made. In Latin they were all called cucurbita, and this catch-all name has given rise to our modern scientific terminology. Botanists know them as cucurbits, members of the family Cucurbitaceae. Nearly all cucurbit plants are vines. They share other traits like separate male and female flowers on the same plant and a hard-shelled fruit without segments inside, known as a pepo (which would be the perfect name for a cartoon gourd who has comic misadventures in a vegetable garden.)

The flowers of many gourd species are just as edible and visually appealing as the fruit. I grew up eating squash blossoms Italian-style, stuffed with herbed ricotta cheese, battered and fried. Photo by Vegan Feast Catering via Wikimedia Commons (2009).

The gourd family is vast and varied, with close to a thousand species scattered across every continent except Antarctica. The oldest-known cucurbit fossil (from the Paleocene, 66-56 million years ago) was found in Montana, USA, but it’s difficult to know where these plants originated for two reasons: 1) continental drift and 2) human drift. Gourds are useful to us, so we’ve always brought them with us wherever we go. Take for instance one of humanity’s favorite gourds, the bottle gourd or calabash (Lagenaria siceraria). Young calabash fruit is edible, while the mature fruit can be dried to make a watertight container. Ancient humans were quick to pounce on this two-for-one deal. Around 14,000 years ago, calabash became one of the first species ever domesticated; possibly the very first. Early humans took calabash seeds with them on their many migrations, and they’ve been found in Paleolithic sites as far-flung as Egypt, Thailand and Peru. The voyage of Columbus was conducted from one land of calabash-growers to another.

Almost every culture on earth is wild about gourds. And why not? Their uses are endless; they can be steamed or fried, spiralized or stuffed, baked into pie or squished into face mask, etc, etc. In West Africa, dried calabashes are used to make drums and other traditional instruments, while in India, the original loofah sponge was a tough, fibrous gourd called, you guessed it, luffa. The gourde is the national currency of Haiti, though it’s made of paper these days. 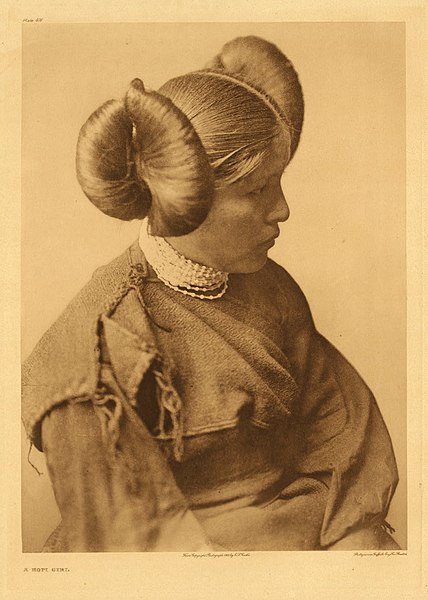 Traditionally, the squash blossom hairstyle indicated a Hopi girl’s eligibility for marriage. Like many other indigenous traditions, it was actively suppressed by US government-backed schools beginning in the 19th century. Hopi girls were forced to cut their hair short to prevent them wearing the style. Today, squash blossom hair is sometimes revived for cultural events and ceremonies. Photo by Edward S. Curtis (1922)

In the American Southwest, the Zuñi and Hopi honor a stripy, gourd-headed nature spirit named Patung, the Squash Katsina. Unmarried Hopi girls once twisted their hair into distinctive double “squash blossoms,” a hairstyle which inspired that of Princess Leia. After bringing our beloved gourds everywhere on earth, it was only a matter of time before we brought them into space.

Human beings cultivate, use and celebrate gourds throughout the world, though not all of the almost-a-thousand cucurbit species are equally well-known. In this series, we’ll take an in-depth look at the flavor, history and personality of some of humanity’s oldest pals. They say dog is man’s best friend, but the first doggie-bowl was a gourd. 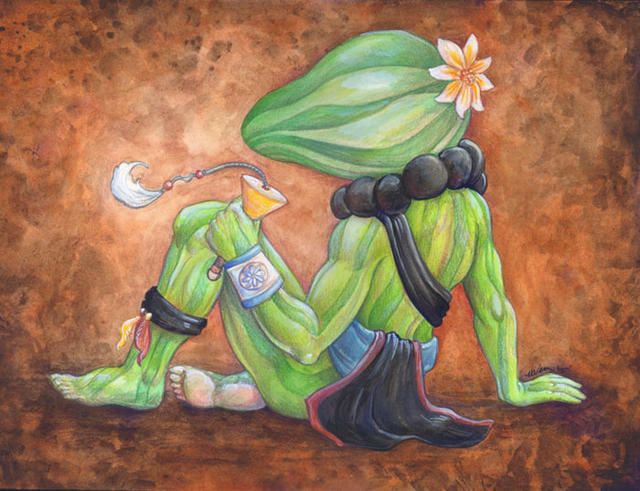 Both the Navajo and the Hopi have lineage groups called Squash Clans, indicating the importance of cucurbits in their cultures. In Hopi culture, Patung is just one of the many katsinim (often written “kachinas”); benevolent nature-spirits with distinctive markings, represented by painted dancers and doll-like icons. Here Patung is depicted by one of my favorite fantasy artists, Ursula Vernon.